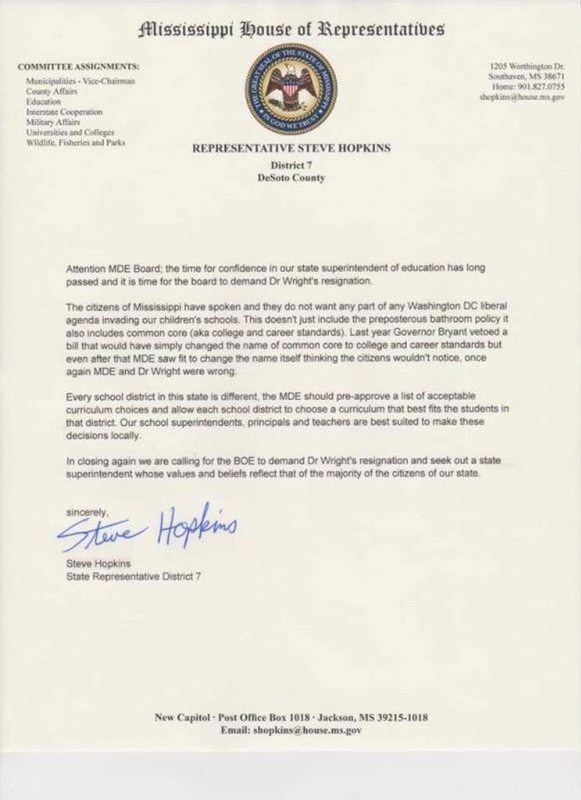 State Rep Steve Hopkins 2016 Regular Legislative Session summary
The 111 days of the 2016 Regular Session of the Mississippi Legislature took some time to get through this year. This session we faced an enormous work load with approximately 1,789 House bills and 969 Senate bills filed and it was up to us as legislators and our respective committees to work through them. Ultimately, 119 House bills and 100 Senate bills remain active. In addition to the large number of bills filed, regular requests to have bills read on the House floor seemed to slow down an already slow pace. However, the Mississippi House of Representatives adjourned “Sine Die” on April 21, 2016, day 108 of the session, a full three days early.
​
This session brought many new faces to the Legislature. The House welcomed 26 freshman legislators (out of 122 members total), while the Senate welcomed 10 new members (out of 52 members total). The new lawmakers jumped right in by authoring bills, serving on various committees and presenting bills on the floor.
Although from time to time there were some partisan disagreements, as is natural and to be expected, major legislation was adopted.

Conservative Budget, Bonding
The Fiscal Year (FY) 2017 State Support budget (includes General and additional State Funds) demanded a lot of attention and nurturing as it was crafted throughout the 2016 Session. House and Senate members were able to reach an agreement on a State Support budget of approximately $6.3 billion. The following figures compare to the FY 2016 State Support level of funding with the Governor’s January reductions and do not include deficits:
• K-12 Education-- $2.24 billion, Funding for Mississippi Adequate Education Program (MAEP) component is at the same FY 2016 level of funding.
• IHL Universities-- $748 million total, a $13.5 million cut (-1.8%).
• Community and Junior Colleges-- $264.7 million total, a $582,160 cut (-.02%).
• Department of Health-- $65.0 million total, a $278,175 cut (-.04%).
The House also adopted a plan to issue roughly $250 million in general obligation bonds for various projects this year, I am proud to say that I voted against this bond bill because I just could not justify voting for millions of dollars in loans when we were cutting all the departmental budgets with the exception of education. In order to raise funds, bonds are often issued. Many people believe bonds are necessary to help fund large projects with the intent to repay the debts over time. Discretionary money for small projects in local communities is also incorporated into this plan. Some of the larger projects included are:
IHL: $61 million for the eight colleges and universities

Senate Bill 2493 establishes the Supporting and Strengthening Families Act. This legislation is designed to give families facing crises the ability to execute a power of attorney for voluntary guardianship for their children for a year. This does not impact parental rights. It provides parents a tool to be proactive before the Department of Human Services or the court systems become involved. Children would be placed with a family member or third party. The agency involved would require a full criminal background check on any third party. Children would be reunited with the parent once the parent’s issue is resolved.
House Bill 1375 encourages the Department of Mental Health to try and arrange for supportive services for alcoholics and drug addicts upon discharge from treatment facilities.
Senate Bill 2527, the “Right to Try Act,” provides immunity for hospitals where investigational drugs are used or purchased.
Pro-Business, Pro-Economic Growth and Transparency
At the beginning of the Session, an “Extraordinary, “Special, Session was held to pass the largest job creation bill in the state’s history. The Continental Tire project in Hinds County will be a $1.45 billion company investment, bringing 2,500 jobs to the Central Mississippi area. The project with Edison Chouest Offshore, Topship, will be a $68 million company investment, slated to bring 1,000 jobs to the Port of Gulfport. Incentives for both projects include provisions for workforce development training and infrastructure improvements. Both companies plan to hire locally and utilize Mississippi contractors for at least 70 percent of construction.
House Bill 461 provides that the filing date for state income tax returns is the same as the filing date for corresponding federal returns.
House Bill 167 withholds a portion of the diversion of sales tax to municipalities that fail to comply with audit requirements.
House Bill 1223, the “To Go Cup bill,” authorizes certain municipalities and counties the ability to establish special entertainment districts, a Leisure and Recreation District. After going through a public hearing, an adoption as a city ordinance, then submission and subsequent approval of a map to the Alcohol Beverage Control (ABC) group, ABC permit holders may serve all permitted beverages in an outdoor environment so long as it is within the boundaries of the district. This will affect the three coastal counties, Hattiesburg, Tupelo, Holly Springs, Greenville, Greenwood, Canton, Grenada, Starkville, Water Valley, Jackson, Senatobia and Corinth.
House Bill 1511 creates the Mississippi Consumer Alternative Installment Loan Act. Enactment of this measure authorizes small loan licensees to make consumer loans under an alternative schedule of rates and charges from those under the Small Loan Regulatory Law. On loans of $4,000 or less, the licensee may charge a monthly finance charge of not more than 59 percent per annum on the unpaid amount of the amount financed.
Senate Bill 2409 creates the Mississippi Credit Availability Act and authorizes licensees to make consumer loans repayable in equal monthly installments over terms of four to 12 months. For loans of $500 or less, the repayment term is four to six months, and for loans of more than $500, but not more than $2,500, the repayment term is six to 12 months. The lender may charge and collect a monthly handling fee not exceeding 25 percent of the outstanding principal balance per month. The fee is not set at 25%, but instead is a cap, with the expectation that competition will be instilled into the marketplace, allowing lenders to compete and ultimately lowering the lending rate for everyone.
Senate Bill 2858 creates the Taxpayer Pay Raise Act of 2016, which is a $415 million tax cut, phased in over 10 years. It will go into effect in two years. This legislation will ultimately eliminate the three percent individual income tax bracket and the franchise tax and ease the financial burden on self-employed Mississippians.
General Bills

House Bill 809 authorizes online voter registration under the authority of the Secretary of State.
House Bill 81 Furnish without charge up to five certified copies of the death certificate of any deceased person who was an honorably discharged Military Veteran or who was killed or died while serving on active duty in the Military. This was my first bill to author and I am extremely thankful, on behalf of all veterans, for it’s passage.
Senate Bill 2167 requires independent candidates to pay qualifying fees and also increases those fees for party candidates.
Senate Bill 2603 permits municipalities with a population of 500 or less to choose to elect three aldermen instead of five. Enactment of this measure would affect 77 municipalities. The reasoning behind this legislation is that many of these small areas have difficulty finding qualified people to run. This is not a mandate, but a choice for the applicable municipalities.
Sept 24, 2015: Mississippi PEP: Callen defends Empower Mississippi campaign tactics to defeat Desoto legislators.
New representation from DeSoto County will come to Jackson in the next legislative session that starts in January. Dana Criswell, Steve Hopkins and Ashley Henley replaced the group that had become a major force in Mississippi government.
July 4, 2015: Clarion Ledger: Challengers face Republican incumbents in DeSoto County
Challenger Steve Hopkins, when he entered the race, wrote “my opponent in the Republican primary has been in office since 1997 and has voted with the Democrats on numerous occasions.”
June 11, 2015: Cottonmouth: Empowering Opponents of Public Education
Steve Hopkins, who is challenging fellow DeSoto County Republican Rep. Wanda Jennings, has received at least $11,000. Mind you that Hamilton and Jennings both oppose legislation advocating vouchers and charter schools.
Mar 17, 2015: Z-Mississippi: Mississippi House Candidate Steve Hopkins: ".. this candidate never met a tax dollar he didn't question the legitimacy of!"
From Facebook Post:
There are 3 things that Mississippi needs to grow into a successful more self sufficient state.
1. A better educated workforce.
2. Less Regulations on Businesses.
3. Lower Taxes.
Sept 3, 2014: Mississippi Watchdog: Suburban mayor paid more than Mississippi governor
Steve Hopkins, a Southaven native and founder of the DeSoto County Conservative Coalition, said even a near-complete change of the city’s leaders couldn’t alter the city’s fiscal course. “When Greg Davis started, he did a lot of good things, but just like any elected position, time in office tends to corrupt the best of people,” Hopkins said. “I really have no idea why the new mayor and aldermen didn’t change course completely.