Apr 15, 2016: Hattiesburg American: Sheriff's son pleads guilty to simple assault
Court documents show that Forrest McGee pleaded guilty April 6 in Hattiesburg Municipal Court to assaulting Hattiesburg Patriot founder Tom Garmon, who filed a complaint April 4 with the Hattiesburg Police Department. McGee was assessed a suspended fine of $601.75 and ordered to complete an anger management course. Upon completion of the course, the case will be non-adjudicated. 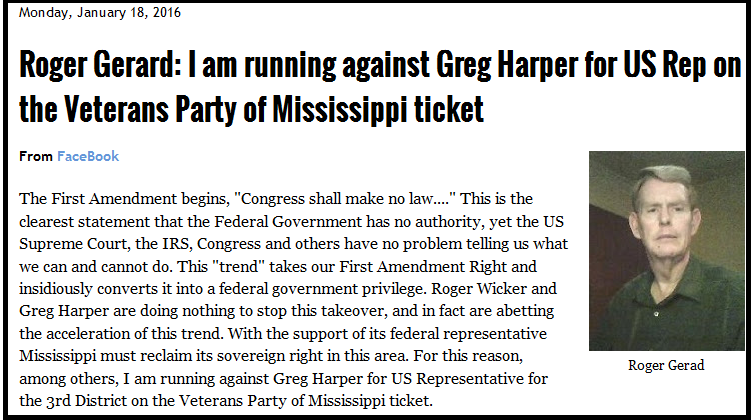 Dec 16, 2015: Daily Journal:  House Democratic leader remains a question mark
“We will have a leader,” said Rep. Karl Gibbs, D-West Point. “We just have to get together and see what the options are.

Jan 29, 2016: Clarion Ledger: Berry retires from MHP; Gillard takes reins
On Monday, his retirement goes into effect, and his now-empty office will have a new tenant. Col. Chris Gillard will take over the reins as director of the Mississippi Highway Patrol and assistant commissioner of public safety.

Nov 18, 2015: Jackson Free Press: ‘No Excuse’: Where the Sidewalks End
Sam Gleese, the ADA coordinator for the City, said going through three mayoral administrations between 2013 and 2014 made it even more difficult to nail down the details of a plan.

Jan 6, 2016: MBJ: State flag to no longer fly on Washington County properties
Those who voted against the removal of the flag, supervisors Lee Gordon and Jesse Amos, say the issue is a state matter. Gordon says there’s “no doubt” the flag needs to be replaced, but that the “majority of Mississippians” need to vote for its removal.

Jan 20, 2016: Jackson Free Press: Election Disputes: No Bibles, and Lots of Swearing
Smith County Circuit Clerk Anthony Grayson was the first to take the "stand" and presented a plethora of subpoenaed documents to the committee.
Nov 23, 2015: Jackson Free Press:  After Getting the Short Straw, Tullos Appeals Loss to the Miss. House
Smith County Circuit Clerk Anthony Grayson said in a separate interview Monday that election commissioners met in private Nov. 9 to discuss personal information such as birthdates and addresses of the voters who cast the nine affidavit ballots — the kind of information he said would not usually be discussed at a public meeting.

Apr 29, 2016: Jackson Free Press: City Lobbyist Synarus Green Running for Rep. Kimberly Campbell's Seat
The City of Jackson's director of policy and intergovernmental affairs, Synarus Green, is running for the seat of Rep. Kimberly Campbell, D-Jackson, who is retiring to become the state director of AARP. Green wrote to friends and colleagues last night:
"I recently learned that Rep. Kimberly Campbell is leaving the MS legislature. Friends/Supporters have convinced me to run to fill this vacant seat formerly held by my mom. After some prayer and thought, I have decided to run. I hope that I can count on your support. You may share this information with others. Ready to serve!"

Jan 6, 2016: Madison County Journal: Supes make sweeping changes
The board voted 5-0 to hire Tony Greer for the position that was held by Mark Houston under the prior board. The salary was set at $119,635 and a county vehicle.

Jan 29, 2016: Daily Journal: Judge rules Houlka officer can’t be charged
Chickasaw County Circuit Court Judge John Gregory has reviewed evidence and video and heard testimony in the arrest of Charlissa Griffin by Houlka Police Officer Blake Westmoreland. Gregory ruled Monday that Westmoreland was within the scope of his office and duty when he arrested Griffin, put her in handcuffs and led her away to a waiting patrol car after repeatedly asking her to calm down.

Jan 25, 2016: Sun Herald: One of two women fatally shot was pregnant, family says
According to Hinds County Coroner Sharon Grisham-Stewart, Janis Nicole Evans, 23, and Stephanie Denise Mejia, 29, were both pronounced dead of gunshot wounds on Ventura Drive in Jackson around 3:30 on Sunday.

June 16, 2016: Gulf Live: Jackson County Legislators receive an "A" on 2016 Education Report Card
Senators Michael Watson and Brice Wiggins, along with Representatives Manly Barton, Charles Busby, Jeff Guice, John Read, and Hank Zuber received an "A" on Empower Mississippi's 2016 Education Report Card, which grades every member of the legislature on key school choice and education reform votes from the past legislative session.