Apr 14, 2016: WJTV: Leland police officers to be equipped with body cameras
Police Chief Billy Barber said all video footage from the cameras will be uploaded for review at the end of each day.

Will Bardwell [Center For Freedom of Information]

May 6, 2015: Columbus Dispatch: FOI head: City violated 'Open Meetings' law
Will Bardwell, a Jackson attorney who serves as president of the Center for Freedom of Information, said the mayor's and council's actions appear to have violated the open meetings act.  "This 'phone polling' that has gone on has been completely rejected as a means of getting around the open meetings act," Bardwell said.  "This was tantamount to city action," he added. "The communication was done with the intent of effectuating a council decision. So that's a meeting."

June 6, 2016: WJTV:  Madison County will not close parks
Supervisor Trey Baxter has proposed selling the property. He did not want to comment on the park issue.
Jan 6, 2016: Madison County Journal: Supes make sweeping changes
MSEG International was hired as the state aid/LSBP engineer in a separate 3-2 vote, with District 4 Supervisor David Bishop joining Steen and Griffin for that vote. Jones and District 2 Supervisor Trey Baxter were in favor of Stantec for that work, too.
Jan 6, 2016: Madison County Journal: Supervisor Paul Griffin calls elected men 'boys'
Newly-appointed Board President Trey Baxter slammed the gavel yelling point of order as Griffin rose and began shouting at Baxter, too. 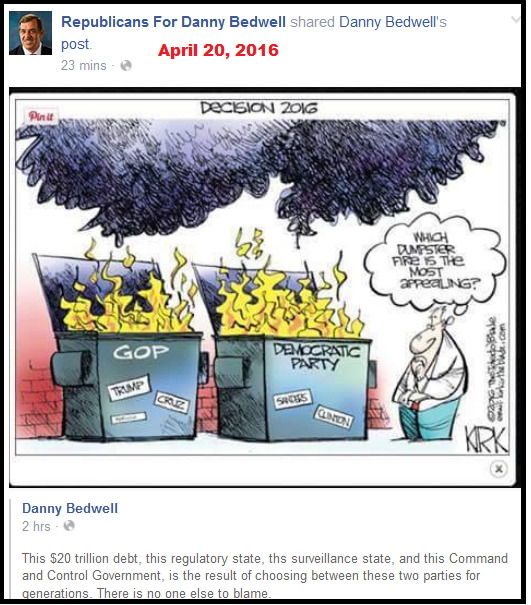 Apr 4, 2016: Monroe Journal: Aberdeen voters go to the polls April 5 for Democratic primary
“Whoever wins, I just hope it’s a big win either way. It’s stressful for the workers and the candidates. My father was in the military, and a lot of people have fought for the right to vote. Voting is one of our freedoms as Americans, and we’ve forgotten that,” said Aberdeen City Clerk Jackie Benson. 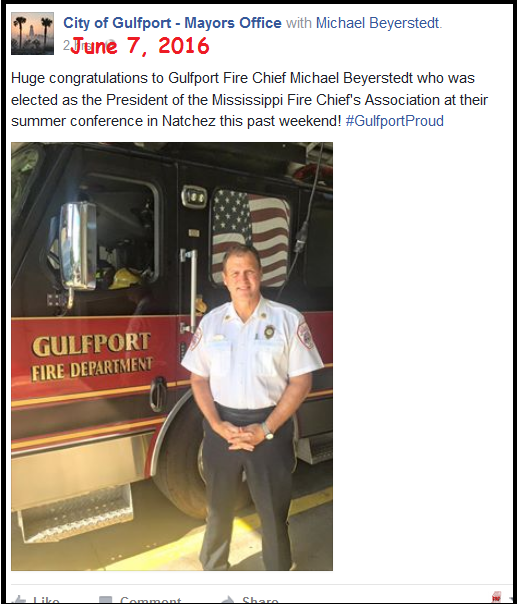 Jan 20, 2016: Madison County Journal:Board attorney amends contract to hourly rate
District 4 Supervisor David Bishop said they were trying to avoid any advance charges that would usually be associated with salaried employees under the old bracket pay schedule.
Jan 6, 2016: Madison County Journal: Supes make sweeping changes
MSEG International was hired as the state aid/LSBP engineer in a separate 3-2 vote, with District 4 Supervisor David Bishop joining Steen and Griffin for that vote. Jones and District 2 Supervisor Trey Baxter were in favor of Stantec for that work, too.

June 6, 2016: Picayune Item: Poplarville swears in new city clerk and police chief
–– The board approved a new policy to only use towing services recognized by the Mississippi Highway Patrol. Aldermen Glenn Bolin recused himself from the vote because he is the owner of a towing business.

Jan 28, 2016: Hattiesburg American: Jody Waits 'honored to serve' Lamar County
Board president Joe Bounds is happy with how Waits has been doing."So far, it's been super," he said. "He has caught on real good and I think he'll be a good choice for the county. I'm real pleased with him."

Mar 11, 2016: Monroe County Journal: Bowen asks for help with Amory Police Department mold problem
According to Amory Police Chief Ronnie Bowen, the police department is in desperate need of repairs, as per discussion in the March 1 board of aldermen meeting.
“The department building is still leaking, and now we have mold growing. This has been going on for 12 years now, and we need help,” Bowen said.

Feb 6, 2015: Daily Leader: Lincoln County continues Common Core efforts
“Whether we agree with it or not, it’s here,” Superintendent Terry Brister said. “The Board put in too much money and work, and we’re not going to trash it until we’re told differently.” Brister said the books, supplies and other needed materials have already been purchased and schools are ready to commence with teaching the new curriculum.

Jan 13, 2016: Sun Herald: Moss Point woman indicted on manslaughter charge in stabbing death
Jackson County Coroner Vicki Broadus said at the time he died due to "hemorrhaging secondary to stab wounds." She did not say how many times he had been stabbed.

Mar 7, 2016: WCBI: Video: Lowndes County Supervisors Must Communicate More
Lowndes County supervisors have put together major economic deals while meeting in their board room having resulted in a lot of jobs coming our way, but District 5 Supervisors Leroy Brooks and District 4 Supervisor Jeff Smith suggests there is some distance or gap between their colleagues.

Mar 8, 2016: Daily Leader: Supervisors argue about budget cut
Wilson said he blamed District 4 Supervisor Eddie Brown and District 3 Supervisor Nolan Williamson for his $159,945 cut, saying they are after the extra money and are the reason he had to lay off four men.

Mar 11, 2016: Picayune Item: City of Picayune declares state of emergency
The city of Picayune is now in a state of emergency, city leaders announced today, caused by a severe weather event. Thursday, according to a proclamation, Mississippi Governor Phil Bryant declared a state of emergency. The proclamation will allow areas affected by flooding to receive government assistance. Picayune Fire Chief Keith Brown said the floodwaters are rising. This includes the Pearl River and the West and East Hobolochitto Creek.
Feb 3, 2016: Picayune Item: Residents might see increase in natural gas rates
In other news, the council took time to recognize Picayune Fire Department Deputy Chief John Mark Mitchell for his 31 years of service to the city after approving a motion to allow him to purchase his badge and helmet for $1. Fire Chief Keith Brown said Mitchell started with the department as a volunteer, moving to a part time position four years later.

Feb 6, 2016: Hattiesberg American: Lumberton board welcomes new alderman
Johnny Buckley was then sworn in to the post previously held by Crider, and the meeting opened as usual. When the meeting adjourned, a reception was held for Alderman Buckley.

Nov 4, 2015: Monroe Journal: New and existing faces to fill county seats following election results
For Monroe County’s results in state races with local connections, Democrat Arch Bullard, who has Aberdeen ties, received 4,972 votes, or 47.15 percent, compared to Republican incumbent John Weddle’s 5,569 votes, or 52.82 percent, in the District 1 District Attorney race. Overall, Weddle was declared the winner of the race with 56 percent of the vote in the seven-county district compared to Bullard’s 44 percent.

Apr 22, 2015: Jackson Free Press: Critics Blast ‘Third-Grade Gate’ Tests
Dr. Kymyona Burk, the state literacy director for the Mississippi Department of Education, explained that establishing standards after testing is completed is customary. After the tests conclude April 23, a 25-member panel will convene to establish the standards, including the so-called "cut score" for the tests.
Apr 14, 2015: MPB: 3RD GRADE READING GATE IS REALITY IN MISSISSIPPI
The test makes sure students are ready to move on the fourth grade, and hold them back if they are not. Kymyona Burk is the state literacy director at the Mississippi Department of Education "The assessment will contain 50 multiple choice items," says Burk. "These items will range from phonics, vocabulary, those reading foundational skills and of course through text comprehension."

Feb 9, 2016: Hattiesburg American: Road to recovery slow for some after 2013 tornado
The EF4 tornado forced the Rev. Carl Burkett to share his sermons at various locations in and around Petal for the last three years as his church was severely damaged 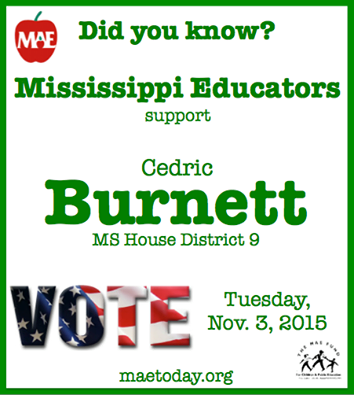 Mar 11, 2016: Monroe Journal: Antique steam fire engine finding new home
Irvin hesitated before voting the only ‘no’ vote to the motion made by Ward 2 Alderman Wilchie Clay and seconded by Ward 3 Alderman Sammy Burroughs to allow the relocation.
Discussed in November, the board took action to purchase new accounting software for the city, depending on the availability of funding.

Jan 18, 2016: Natchez Democrat: Supervisors to interview school board nominees Tuesday
Supervisor Calvin Butler echoed his sentiments, saying the appointee needs to be able to communicate effectively with members of the community.

Aug 24, 2015: Monroe Journal: Party runoffs scheduled for Aug. 25
“It was a very, very low turnout. With that much of a decline in voters, it could impact the results of the races. I have no idea why turnout was so low,” said Monroe County Circuit Clerk Judy Butler. “Typically if nothing else, the sheriff’s and supervisors’ races will generate so much interest.”
Nov 4, 2015: Monroe Journal: New and existing faces to fill county seats following election results
In what was a field of nine candidates for circuit clerk going into the Aug. 4 Republican and Democrat primaries, the race pitted Dana Sloan against Carol Knight for the seat held by Judy Butler, who is retiring at the end of the year. Sloan defeated Knight. Sloan had a total of 7,332 votes, or 68.66 percent compared to Knight’s 3,346 votes, or 31.33 percent.

Jan 5, 2016: WDAM: Hattiesburg looks to Lamar Co. for wastewater disposal; residents, supervisors oppose
Warren Byrd, District 2 supervisor said, "Spray field application, I know Hattiesburg's got a problem, but it's not Lamar County's problem. I see no benefit to Lamar County or anything from this, and I'm opposed to it. I'll stand opposed to it."